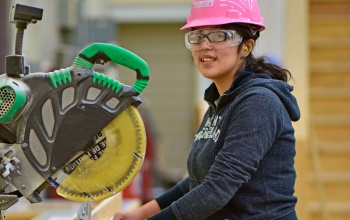 Women make up just 3.8 per cent of on-site workers. EllisDon and Build a Dream are working together to change that.

EllisDon and non-profit Build a Dream have partnered up to tackle diversification in the construction industry.

The contractor and Windsor-based non-profit organization will work together to attract young women to careers in construction, where only 3.8 per cent of job site workers identify as female.

“We believe that our future pipeline relies on the work of organizations like Build a Dream,” Kieran Haw, COO and executive vice-president of Construction for EllisDon said in a release. “Exposing our youth to career opportunities that may not have been typically considered will help showcase the work we do at EllisDon and the meaningful careers we provide.”

Build a Dream provides young women with access to specialized programs and resources in careers where women are underrepresented. The two organizations connected at a Build a Dream career discovery expo in London, Ont. last year. Now, EllisDon will help fund Build a Dream’s mission with nationwide expansion plans.

“It’s not just about empowering young women, it’s about filling the skills gap by tapping into the other 50 per cent of the workforce,” Nour Hachem-Fawaz, president and founder of Build a Dream, said in a release. “We believe that together we can help young women make informed career decisions, while encouraging companies to diversify and commit to inclusive workplaces.”

According to BuildForce Canada’s most recent forecast, the construction industry is made up of approximately 13 per cent women. Of this figure, only 29 per cent work directly on construction sites, while the remaining 71 per cent work primarily in administration and management.

In addition to a lack of exposure to careers in construction, the Symposium Report on Women in Construction also states that many tradeswomen report incidents of harassment and bullying, unsafe working conditions on the job and lack of workplace policies and management support as possible deterrents for attracting and maintaining female workers.

Build a Dream is working to change the narrative surrounding women in the trades by organizing community events for women in the trades, inspirational speakers and marketing merchandise such as t-shirts with the word ‘Bossy’ crossed out and replaced with ‘Leader.’

‘We are working to transform industries across Canada,” Hachem-Fawaz said. “EllisDon’s investment is only the beginning.”

Related
Women made small gains on job sites in 2019, but remain heavily outnumbered throughout construction
Younger generation gets chance to try out construction trades as industry stares down labour shortage
Detail-oriented – Ana Sofia Estrada, Portico Dream Builders
The impending shortage: Canadian construction industry has 300,000 jobs to fill over next decade