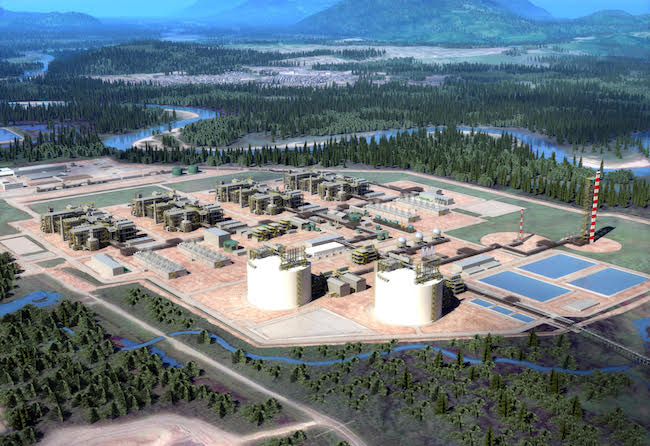 Construction on the liquefaction plant and export terminal in Kitimat, B.C. is expected to emploiy 7,500 workers at peak. PHOTO: LNG Canada

VANCOUVER—The team of companies behind the development and construction of a major liquefied natural gas project on British Columbia’s north coast have launched a new initiative aimed at recruiting more women to work on building the liquefaction plant and export terminal.

LNG Canada said the province-wide workforce development program will help more women participate in the megaproject and get a start in the construction trades.

“Women in British Columbia currently represent just under 5 per cent of a typical construction workforce, despite comprising 50 per cent of the working population,” Andy Calitz, CEO of LNG Canada, said in a release. “This lack of diversity is not a women’s issue, it is a workplace issue.”

The international roster of companies behind the Kitimat, B.C. project, including Shell, Petronas, PetroChina Company Ltd., Mitsubishi Corp. and Korea Gas Corp., signed off on investing in the terminal last October. They’ve since moved ahead with construction, naming a joint venture of JGC Corp. and Fluor Corp. as the prime contractor. The contractors took over the job site March 1.

All parties will work together on implementing the new recruitment and training initiative. Meanwhile, non-profit Women Building Futures will take the lead on developing and delivering the training.

The four-week “Your Place” course for new recruits is open to B.C. women 18 and over from any working background. LNG Canada will pick up the cost of tuition, safety gear and airfare for those flying into Kitimat from elsewhere in the province. Women who have gone through training will be guaranteed entry-level jobs on the construction project, which is expected to require a total workforce of about 7,500 at peak.

For those already working in the construction trades, LNG Canada said there will be “high-demand” for labourers, heavy equipment operators, ironworkers, welders, electricians and pipefitters.

Construction on the project is already underway and expected to ramp up to full capacity between late 2021 and 2023. The first shipments of gas from the site are estimated to take place in 2025.