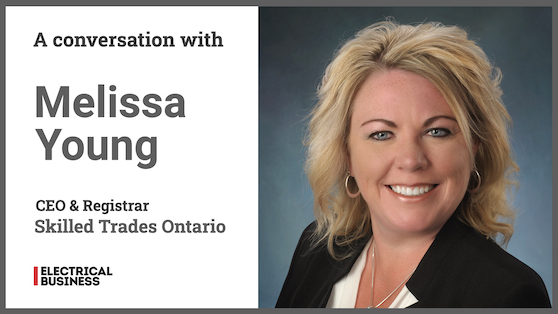 February 28, 2022 – You would be hard-pressed to find someone more engaged in apprenticeship and skilled trades than Melissa Young, who has lived and breathed skilled trades for some 30 years. A quick scan of her LinkedIn profile shows years of experience with training, apprenticeship, certification and harmonization.

But it wasn’t until this New Brunswicker became executive director of NETCO (National Electrical Trade Council) in 2018 that she came onto my radar, and we got to know one another. Fast forward a few years, and she is now the inaugural CEO & Registrar of the new provincial agency Skilled Trades Ontario (which replaces Ontario College of Trades, a.k.a. OCoT).

Upon hearing the news of her appointment, I eagerly reached out to Melissa to congratulate her and, of course, to ask her for an interview after she got settled in.

ANTHONY: Thanks for joining me to talk about Skilled Trades Ontario [STO], especially as you’ve only been on the job for about six weeks!

When we published news of the launch of Skilled Trades Ontario, industry stakeholders sounded, on the whole, quite positive about the new agency. Now that we are about two months in, what are you hearing from industry? Are they still on board, or do they think we need to go back to the drawing board?

MELISSA: Well, six weeks into an organization that represents roughly 80,000 to 90,000 apprentices… there are going to be growing pains, right? Our online portal is a work in progress, but that’s to be expected, and we’re addressing issues as they arise.

But we’ve been contacted by a lot of different stakeholders and, so far, nothing but positive feedback.

ANTHONY: Monte McNaughton, Ontario’s Minister of Labour, Training and Skills Development, said “By creating this new agency, we are working for workers and delivering the generational change that labour leaders and employers have been calling for”. You also referred to the launch of STO as a generational change. What do you and the minister mean by this?

MELISSA: When we talk about generational change, number one is ease of access to information and services. In today’s world, everybody is used to online access. For example, with Service Ontario, you can visit their office to register your vehicle, but you can also do it online. So it’s really about adapting to what works best for industry.

ANTHONY: Moving as much as possible online should ease the process for apprentices and employers alike. But, before we go any further, can you recap for me how the apprenticeship system works now?

MELISSA: Minister McNaughton said Ontario’s apprenticeship system made him think he was looking at the Tokyo subway map, and he wasn’t wrong.

The premise behind Skilled Trades Ontario is to eliminate this dual system; so part of that generational change involves simplifying these processes to make apprenticeship a one-stop shop where you can get everything done.

If you are registering as an apprentice, you’re doing that with STO. Whether taking your training or registering for classes—or maybe you are the sponsor—it will all occur through STO. You will have one portal, one access point for everything related to your trade—from the very beginning, then right through to certification.

ANTHONY: I love that subway map analogy! It could be why I’ve never really understood the system myself. As the process becomes simpler to understand and navigate, the greater the chance we’ll keep people in the system until they become certified, skilled tradespeople.

I imagine both Skilled Trades Ontario—and you, as its CEO & Registrar—have a mandate to fulfil and some immediate priorities in mind.

MELISSA: As you noted, I’ve worked in this field for many years. Based on my experience, I have three key priorities that I brought to the table when accepting the role of CEO and Registrar.

The first involves mobility—getting Ontario harmonized with the rest of the country. We know there’s a labour shortage in Ontario, but there are other provinces where there isn’t so much of a shortage, or they have apprentices who are looking to complete their trade. So, let’s get them into Ontario.

I’m from the East Coast—a very transient workforce—and a flight to Ontario is a lot easier than a flight to, say, Fort McMurray.

Right now, there is a bit of a barrier for apprentices who want to work in Ontario. So STO will work to eliminate that; to bring Ontario and the Red Seal trades in line with the rest of the country so that apprentices can work seamlessly through their apprenticeship between provinces.

My second priority is around that one-stop shop so that, right from the day you register to the day of completion, Skilled Trades Ontario is working with you. You’re not jumping around all over the place trying to guess where to go, what to do, and who to speak with.

The third priority is around accessibility. There’s a lot of promotion and marketing of the skilled trades—tons of it, actually, and that’s great. We need to promote these good-paying, rewarding jobs. The problem that arises is figuring out how to get started… figuring out the pathways that take you from apprentice to journeyperson.

There are, in fact, several different routes you could take. You could contact a local union office and go through the labour route; you could take a program in college, then go into employment; or you could knock on employers’ doors and pursue direct employment.

So there are many pathways, but we don’t do a good enough job promoting these pathways. Let’s say I’m a young person or a newcomer, and I’ve decided to get into a trade… how would I know any of this?

If you were to google “How do I become a carpenter in Ontario?”, you’re not going to get a simple answer. Sure, you’ll get search results for every college that offers a Carpentry program, but you’re not going to come up with something succinct that explains “Here are the jobs, here’s how you apply along one of these pathways”, and so on.

Quite frankly, we don’t make it very easy for people to get into apprenticeship. Simplifying this process to make the trades more accessible is a key priority for me.

ANTHONY: You raise an excellent point. There has been a lot of promotion and marketing for the trades but, if a person can’t identify or navigate these pathways, we risk not getting new apprentices in the first place, never mind losing them before they complete their apprenticeship.

MELISSA: And that’s also where employer engagement comes in. We need employers at the table, working with us, and saying “We’ve got X number of jobs in these occupations, help us fill them”.

That piece of the puzzle—employer engagement—is huge. Of the 144 trades, only 22 are compulsory. So how do we convince employers to get engaged; to register apprentices and participate in the apprenticeship program and see its value?

ANTHONY: I imagine there is a mechanism for industry stakeholders to reach out to Skilled Trades Ontario so they can work more collaboratively with you?

MELISSA: Sure, they can visit the website and email us, and it will be triaged to the right individual. We have a fantastic team of folks who are very good at getting back to people.

In fact, we will be embarking on a campaign involving apprenticeship, and part of it will specifically target employers that don’t participate… they are a big focus for us.

If you’re an employer, reach out to us, because that’s what we’re here for. We’re here to help.

ANTHONY: Thanks again for meeting with me, Melissa, and best of luck to you and your team. For our readers, please visit skilledtradesontario.ca to learn more.