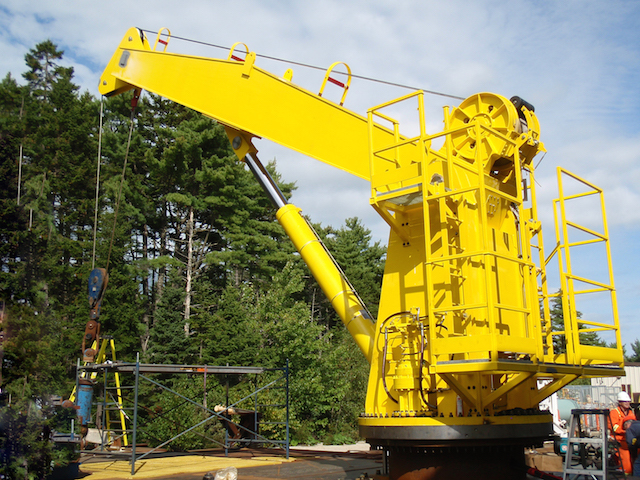 Over 100 years ago, Hawboldt Industries was founded in Chester, N.S. At its inception, the company used its foundry to produce equipment and vessels for the cod fishery. However, in the decades since, Hawboldt has evolved with the times and the market. Its most recent evolution: producing marine cranes.

“Some of it is forward thinking, some of it is reactionary,” said Hawboldt’s general sales manager, Paul Phillips, of how the company has developed over the years. “People could see that the fishery was at its highest point and then we could see the decline. At the time it was an easy transition into the research community.”

Phillips noted that research is a very active market currently — many countries are looking to build research vessels to map their coastlines for ocean research and potential mineral resources. With its facilities and capabilities, Hawboldt was well suited to begin developing customized solutions for its customers. In many cases those custom solutions become product lines for Hawboldt, which in 2005 became part of the Timberland Group based in Woodstock, Ont.

“You can see the ebbs and flows of each industry,” Phillips said. “When one is up another might be down. So we diversified ourselves. In the crane business, we looked at acquiring another company, but when that didn’t work out we thought the next best thing would be to hire a very well-respected person in the industry and bring them onboard to develop our own line.”

That very well-respected person ended up being Reed Okawa, formerly of Hydra-Pro Inc. and North American Crane and Equipment. With Okawa positioned as business development manager, Hawboldt was able to move from sourcing existing cranes into building their own from scratch.

“We are looking at pretty much all markets in the marine crane business,” Okawa said. “We’re building for oil terminals, for research boats, for the oil transportation business. We’ve started some designs for the new market that’s coming up, LNG (liquid natural gas) transportation.”

The cranes Hawboldt designs fall under such categories as fixed boom, telescopic boom, and knuckle boom styles. Each style can be customized for Hawboldt’s various markets. For example, Okawa said, Hawboldt’s capabilities enable it to design and produce almost anything it needs in-house to ensure it meets the standards of the American Petroleum Institute.

Hawboldt’s business model covers almost any marine vessel applications. One of the more innovative markets has been in providing launch and recovery systems for ROVs (remotely operated vehicles) and AUVs (autonomous underwater vehicles).

While no one knows what new evolutions the market may demand of Hawboldt in the future, Phillips said, “We’re proud to be a Canadian deck equipment company and to compete with global companies.”