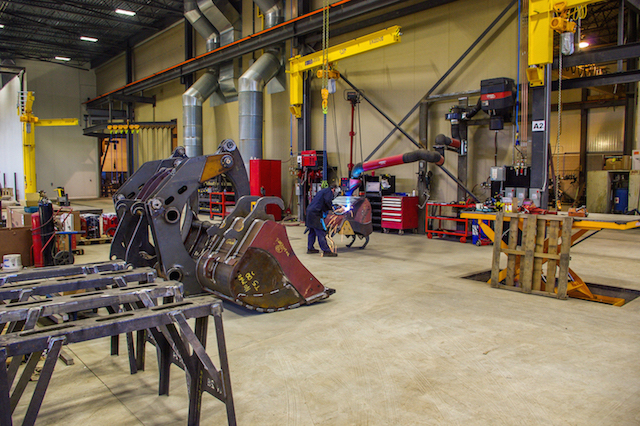 “Following an investment we made in our sales team a couple of years ago to expand our sales coverage to include both Canada and the continental U.S., we’ve been experiencing a growth in demand for our product,” said company president Ben Craig. “As a result, we were able to justify the expansion of our Hartland facility.”

Craig said the expansion increased the size of the paint shop, and drying and assembly areas significantly. However, the highlight of the expansion was the installation of two 30-ton cranes that service the three heavy welding bays.

“We’re hoping to pursue large structural welding and attachments for the mining and heavy construction industry,” Craig said. “Obviously, very large attachments for quarries and mines and that sort of thing. We can do almost anything.”

The two 30-ton capacity cranes were built by Street Crane Co. Ltd and were supplied and installed by O’Brien Material Handling. The cranes travel on two 53-foot beams at a 102-inch gauge. Each crane has an 18-millimetre rope and weighs 2,297 kilograms.

Craig manufactures custom attachments such as buckets, plows, and wings for excavators, backhoes, loaders and other heavy equipment, according to the company website.

The federal government’s Atlantic Canada Opportunities Agency contributed a repayable $500,000 grant toward the expansion with the New Brunswick government contributing an equal amount, the Government of Canada announced in March. The company contributed the remaining $2.5 million.

A year earlier, Craig found itself at the centre of a controversy when the New Brunswick government awarded a snowplow contract to a Quebec firm that had bid only $1,600 less on a $315,609 contract, according to news reports. Public backlash led to the contract being cancelled.

However, during the unveiling this spring of the expanded plant, Craig said the snowplow controversy was now in the past, the Woodstock Bugle-Observer reported.

“We were disappointed with that decision, but our relationship with the government is kind of like your brother or close family member,” the reported quoted Craig.

The work toward the plant expansion began when the oil and gas and commodity mining markets were stronger, Craig told Crane & Hoist Canada. While those markets have since weakened, the company will utilize the expanded plant for any other manufacturing opportunities that might arise.

“We obviously believe in the long-term and general business was very strong,” Craig said. “So we continued our expansion in hopes of better days for commodities and oil and gas. We’ve got some great contract manufacturing opportunities that we’re working on that we’re very excited about.”

The family owned business started humbly as a machine repair shop and service station in 1946 and is now the largest privately owned attachment manufacturer in North America, notes a history on the company website.