Moving beyond barriers in a male-dominated industry

Editor’s note: We regret to inform Dr. Shimrit Perkol-Finkel was killed in a traffic incident on March 7. The accident took place on Sunday afternoon, close to the offices of ECOncrete, an environmental infrastructure startup that Perkol-Finkel co-founded in 2012.

Dr. Shimrit Perkol-Finkel said women have a lot of power together when it comes to working in construction. She started ECOncrete, an environmental infrastructure start-up, with her business partner Dr. Ido Sella in 2012 and says what worked for her was choosing not to be intimidated by barriers in a male-dominated workplace.

“As a barrier to entry the first thing that comes to mind is men,” she joked. “Other than that, I think it’s simply fear. It might be the stigma that construction is a masculine thing, but I chose not to be intimidated by it. Being a ‘woman in construction’ didn’t even cross my mind because I was just so devoted to the goal and I just went for it.

“From what I see around me, it’s the fear of being that one person in the room,” said Perkol-Finkel.

“People might think ‘What is she doing here? Can we trust her?’ That is a very wrong perception and that might be one of the reasons we don’t’ see as many young girls going into STEM, unfortunately.”

ECOncrete is a new technology that builds coastal marine infrastructure in a way that provides ecological benefits to the marine environment while providing traditional construction elements.

“The technology targets sea walls, pier piles, and anything being built with concrete in the marine environment,” said Perkol-Finkel.

ECOncrete offers a suite of high performance environmentally sensitive concrete solutions that enhance the biological and ecological value of urban, coastal, and marine infrastructure while increasing their strength and durability. The company is based in Tel Aviv, Israel, but is beginning to expand globally having just begun market analysis into the Canadian market, and completed several projects in the United States. 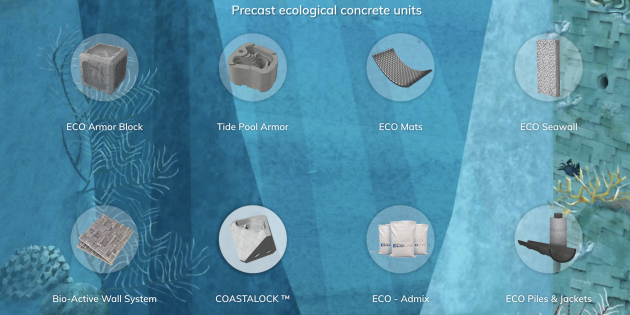 Some of the products ECOncrete offers. Photo: econcretetech.com

“With over half of the world’s population concentrating along coastlines, accelerated coastal development which inflicts severe stress on natural ecosystems is inevitable,” reads the company’s website. “Combined with growing threats of sea-level rise and increased storminess, coastal and urban environments world-wide require development, retrofitting and intensive maintenance. The chemical composition, plain design, and low surface complexity of most such infrastructure are not surrogates to natural substrates, therefore ‘grey’ infrastructure are typically dominated by nuisance and invasive species.”

“Because of its multidisciplinary nature, we combine biology, ecology, concrete, engineering, and product design. It’s a really cross-disciplinary company. It falls under many different categories. We are an impact construction tech company working in the blue space. There is a lot of buzz about blue economy. We are definitely in that arena but we are bringing it to the construction tech industry. And I am proud to do that because it’s a big challenge.”

Perkol-Finkel said she met her business partner when she first started her PhD and was working on a project that involved manmade structures and how to make them more similar to natural reefs.

“My background is marine biology and so is the co-founder’s background. We ran different experiments and found a way to use pre-existing infrastructure like an old jetty, or something similar, to create that natural feel. We noticed by adding quite a small change to those older structures, we can really boost up the life of that pre-existing structure and that’s where the idea was kind of started,” she said.

The problem she was trying to solve was, “How can we take the existing structure and use it for biological purposes without compromising its functionality or performance?”

“Once we started developing the concept we looked at different structures across different locations and noticed there’s a lot of concrete in the water,” said Perkol-Finkel. “About 70 per cent of coastal marine construction is concrete based and concrete is not a good material for marine life, because of the harsh chemistry of the concrete.

“How can we take this material that is destroying so many coastal environments and jeopardizing resources along the coastline, and use it without compromising its strength?” she asked. ECOncrete started an internal R & D process studying concrete and the different additives to concrete. “We waited for six months to deploy our first experiment. And then waited for biology to give us the answer we were looking for.”

A fascination with marine life

Perkol-Finkel was always fascinated with marine life. After army service, she immediately went into academia to study biology.

“My dad used to take me to the beach in Tel Aviv and I went to the beach very often and I was so intrigued by marine life. I took an extra credit course in high school and my project was on the life on the breakwaters of Tel Aviv. It started way back then,” she said. “Now I wasn’t sure exactly what I was going to do, whether marine or not, but once I started engaging, I was fascinated. I want to thank my co-founder for taking me away from academia and into the commercial world.”

ECOncrete’s co-founder Dr. Ido Sella told Perkol-Finkel there is no way they could achieve any impact from academia. At least not with the impact and scale they wanted to have with what the two were developing.

“It was clear to us that to develop this and make an impact we need to develop it from a commercial perspective and apply the science that could then be adopted by the industry and seamlessly integrated into any concrete facility and project.

“That was the goal for us and that’s why I went into the industry,” she said.

Perkol-Finkel said she never really put much thought or emphasis on the barriers she was unknowingly coming across as she became more involved in the construction industry.

“I never really gave it a lot of attention or emphasis. I didn’t really see it as a barrier and never really thought about it,” she said. “When I became CEO of the company it wasn’t a decision to make a woman run this company. It was kind of organic. I think it worked best for the company because we have a really nice synergy between the two co-founders. Even though this is a highly traditional and conservative industry, we never let it stop us in any way.”

She said she noticed the barriers other women were facing more when she joined some women in leadership groups.

“Started seeing that there wasn’t a whole lot of women in those groups. But I never thought of it as something of a challenge for me. I just continued forward. Also, with respect to raising funds, I was responsible for any venture capital efforts and only after I closed two rounds I started seeing that women entrepreneurs have a harder time raising money.

“So maybe it would have been a lot easier if I were a man. I don’t know. But I’m not even thinking about it. I just move forward with a very passionate perspective of ‘This needs to be done and we are the right people to do it. We are the most qualified and it doesn’t matter if I’m a female or male.’”

In Israel there are programs specifically designed for girls and young women to learn skills like coding.

“Why do we need specific programs for girls? We just need programming programs that girls are welcome to be a part of. But no, apparently this is a huge barrier. At least these programs are giving the baseline without any barriers or fear of performing or underperforming. Unfortunately, I still think it’s an issue.

“I would encourage women to join groups and organizations that support and empower women because we have a lot of power together,” she said.

Perkol-Finkel achievements within the industry have already been widely recognised, being selected as a 2018 We Empower awardee for her achievements in advancing UN Sustainable Development Goals, representing UN region Western Europe and Other including North America, and in 2019 she was awarded the prestigious EU Women Innovators award, being the first women in Israel to receive the award.