Mind the labour gap: Construction industry needs to recruit 307,000 workers over next decade

February 12, 2020By David Kennedy Presented by: 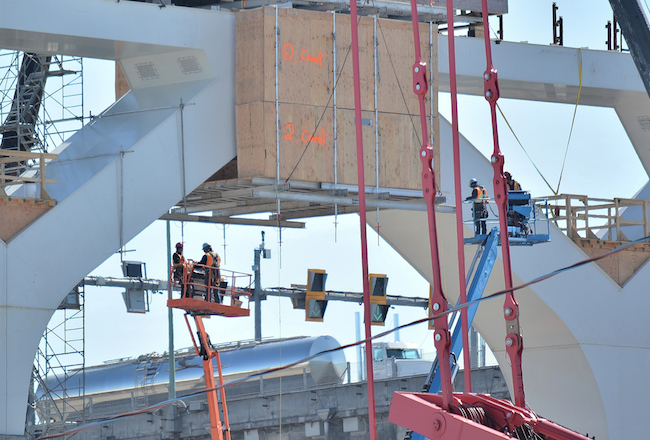 Major building projects kept builders busy through the 2010s. New work is expected to stretch the industry’s labour market to its limit in the 2020s. PHOTO: Ziggy1/Getty Images

The construction labour gap isn’t getting much narrower. The impending retirement of a generation of workers and continued growth in the industry mean employers will need to coax more than 300,000 Canadians into lacing up steel toes over next decade to keep pace with demand.

Between 2020 and 2029, research organization BuildForce Canada projects 257,100 retirements and the creation of 50,200 new construction jobs across the country — enough for 307,300 vacant positions.

Of course, new recruits will also be stepping onto job sites during that time period. Even accounting for the expected entrants, however, the industry will likely come up well short of its labour requirements by 2029. Based on historical trends, BuildForce, which released its latest national labour forecast Feb. 10, expects the industry to see an influx of 227,600 new workers 30 or younger over the next decade. The recruits will fill about three quarters of available positions, leaving an approximately 80,000-job gap.

Though forecast recruitment comes close to keeping up with retirements, continued growth in the Canadian construction industry will add fuel to the looming worker shortage.

“Canada’s construction outlook has strengthened from last year,” Bill Ferreira, BuildForce’s executive director, said in a release. “Our scenario predicts that growth will slow in the latter half of the decade, although labour market challenges are anticipated to intensify as the retirement wave crests and the pool of available youth shrinks.”

KEEPING UP WITH DEMAND

Contrary to its analysis last year, which projected that industry growth would plateau in 2020, BuildForce now sees construction continuing to expand through the mid-2020s. It pointed to the country’s improved economy and immigration-driven population growth as two key factors for the shift.

On the residential side, the research organization forecasts greater activity in provinces with younger populations, such as Alberta and Saskatchewan, from now until 2029. Quebec and Atlantic Canada, conversely, are likely to see housing starts slip. The increasing popularity of less labour intensive multi-unit residential projects will also cannibalize some of the residential business traditionally dominated by single family homes. It is estimated that 22,700 fewer workers will be building new homes by the end of the decade.

To pick up any slack, however, BuildForce projects housing renovation and maintenance requirements to rise “steadily” through 2029. Overall by that time, 17,100 more workers are expected to be engaged in the residential sector compared to 2019.

Employment in the non-residential construction segment will also be up considerably a decade from now. BuildForce anticipates the sector will add 33,100 positions by 2029, with an “explosion” of major new public transportation, infrastructure, health care and energy projects as the primary factors. 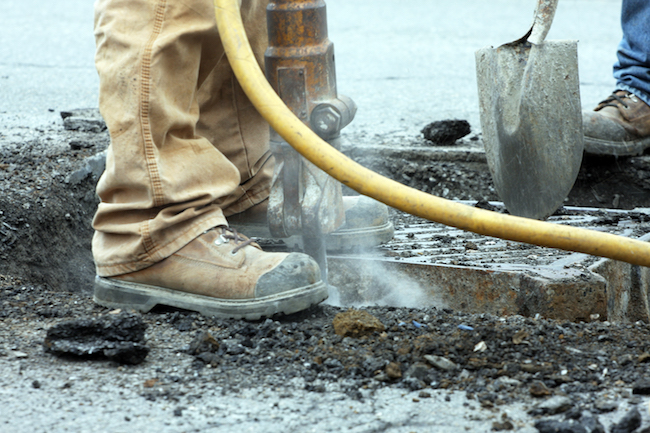 Growth in the Canadian non-residential sector will outpace growth in residential building over the next 10 years. PHOTO: Kozmoat98/Getty Images

“The most significant growth is expected to take place between 2020 and 2021 and will be concentrated in British Columbia, Ontario and Quebec,” BuildForce says in the report. “Later in the scenario period, stronger growth is anticipated in Saskatchewan and Alberta as economic conditions improve and new resource investments are expected.”

On the West Coast, B.C.’s construction industry will benefit from the new LNG Canada export terminal in Kitimat, renewed work on the Trans Mountain pipeline and several new infrastructure projects, such as the Pattullo Bridge replacement and transit work in Vancouver. Ongoing construction on the Site C dam and the Vancouver International Airport expansion are also major contributors to forecast growth in the province.

The outlook for in the other Prairie provinces is more muted. The report points to growth accelerating in Saskatchewan starting in 2021 as a result of mining and utility sector projects, but declining again beyond 2025. After several strong years for the building industry in Manitoba — with work peaking on the Keeyask dam and the Enbridge Line 3 pipeline expansion — employment requirements in the province will likely decline through 2023.

Ontario’s labour market is expected to remain very tight, though BuildForce expects it to peak in 2020, largely as a result of work on multiple light rail transit projects and “overlapping demands” from a pair of nuclear refurbishments. The research organization forecasts a second peak in 2026 with Toronto transit expansions and numerous large hospital projects squeezing the market. 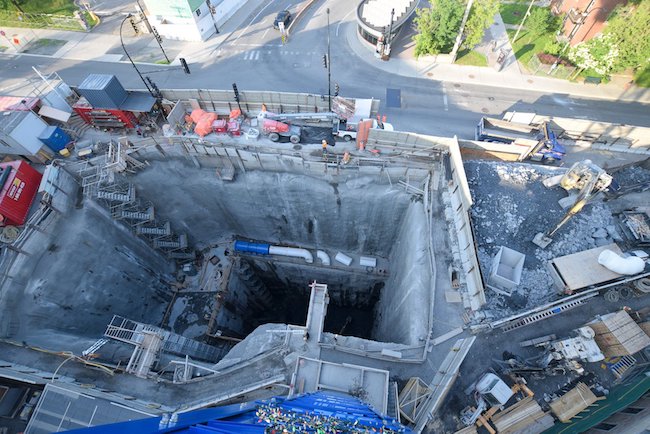 Looking east to the Maritimes, New Brunswick construction activity is expected to remain relatively stable over the next decade, backed by residential renovation work, moderate industrial expansion and infrastructure projects. Likewise is Nova Scotia, BuildForce forecasts a relatively stable market after a “surge” in activity over the next two years due to road infrastructure and new hospital projects. Prince Edward Island, which has experienced a major building boom over the past several years driven by population growth, will see that continue this year, though growth is expected to moderate as the 2020s draw on.

Finally, a declining population in Newfoundland and Labrador and the completion of major projects in the next two years will see the province’s construction force slip back to lower levels.

There are few easy solutions to the labour crunch as the tail end of the Baby Boomer generation ages out of the workforce. Still, BuildForce anticipates the industry will employ some stopgaps to get projects built in 2020 and 2021 with labour markets at their tightest. Relocating workers is one prominent example.

This strategy has its limits. “As demographic conditions unfold, there is an expected downward trend in provincial levels of unemployment that may lead to less workers being available for mobility to meet changing requirements across provinces,” the report notes. “This trend suggests that — even if the full potential of interprovincial mobility is realized — industry will likely still need to expand recruiting efforts for new workers from local sources of labour, from other industries, and from new immigrants to meet the industry’s long-term needs.” 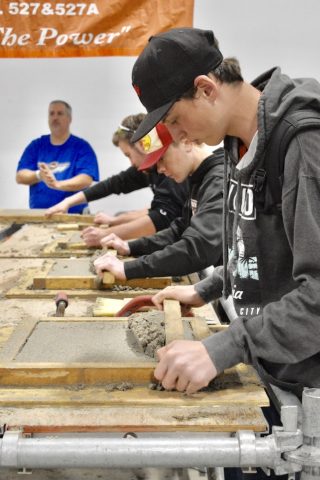 Students at Future Building 2019, an annual event hosted by the Ontario Construction Secretariat that lets students test out the trades through both hands-on and virtual experiences. PHOTO: OCS

Builders, industry associations, governments and educators all have a role to play in bolstering recruitment. In recent years, numerous collaborative efforts aimed at funnelling more students toward skilled trades and other construction careers have gotten off the ground. A video series called Job Talks Construction, which launched last month, is one of many examples. The initiative, spearheaded by the Residential Construction Council of Ontario (RESCON) and several other provincial and regional construction groups, looks to tune both students and educators into the opportunities in construction.

“We need to get the message out that there are thousands of well-paid, rewarding jobs that will be available for young Ontarians in the coming decade,” Richard Lyall, RESCON’s president, said in a release last month.

Other efforts sponsored by governments, industry and trades groups and companies themselves are underway across the country. With 22 per cent of the current construction labour force expected to retire by 2029, the recruitment pushes are designed to buck the historical trends measured by BuildForce that forecast 227,600 new workers will enter the industry over the next 10 years. Any additional recruits will help narrow the expected labour gap.

Canada’s population is expected to continue growing in the coming decade, but not as quickly as in recent years. Meanwhile, the country’s increasing number of retirees will lead to a fiercer competition for talent, tightening the labour pool. The construction industry will need to turn to traditionally underrepresented segments of the population to land more recruits.

Likewise, Indigenous people made up 4.9 per cent of the total construction population in 2019. With Indigenous populations being the fastest growing in Canada, it’s an important focus area for the industry.

Finally, the building industry needs to make strides to attract more new immigrants — traditionally a substantial part of the construction workforce — BuildForce says. Unlike past immigrant populations from Europe and the Americas, today’s immigrants, most of whom come from a range of countries in Asia, are less likely to take up construction.

Related
The impending shortage: Canadian construction industry has 300,000 jobs to fill over next decade
Younger generation gets chance to try out construction trades as industry stares down labour shortage
Editorial: A growing opportunity to recruit women in construction
4-MIL from Ontario to support “current and future construction workers”