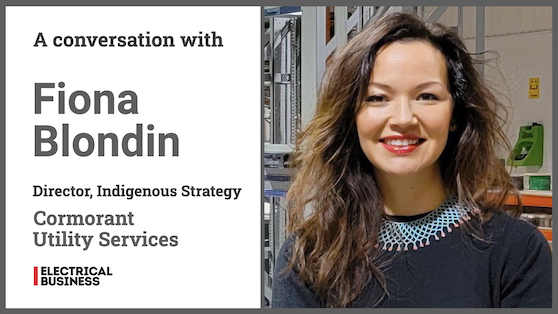 November 22, 2021 – Fiona Blondin is a Dene from the Yellowknives Dene, a First Nation in the Northwest Territories. Her grandfather, the late George Blondin, was invested posthumously as a Member of the Order of Canada in 2003 for his devotion to preserving the heritage of his people—compiling the stories of his people and Elders, and publishing them in several books.

“He became an author in his late 50s, taking oral history and documenting it for the next generation of Indigenous people—both from our nation and from other nations,” Fiona says. “My grandfather had a tremendous impact both on myself and on our family… thinking about how Indigenous people fit into a Canadian context, and how Canadians fit into an Indigenous context.”

Fiona added that the Blondin family endowed a scholarship in her grandfather’s name for students from the Northwest Territories to continue their post-secondary education. “He is somebody that has inspired the path that I am on, inspired the work that I continue to do to this day with Indigenous communities, and with the corporate sector… he was a champion.”

In February 2021, Fiona became the first-ever director, Indigenous Strategy, for Cormorant Utility Services, which serves the utility power sector in Ontario through its four operating companies. As part of this challenging new role, she is responsible for developing and implementing a long-term strategy to promote and ensure the inclusion of all Indigenous communities across Ontario.

Now that you know a little about Fiona, you can understand why I reached out to her to better understand the importance of healthy Indigenous relations, specifically against the backdrop of energy projects.

One of Fiona’s first accomplishments within Cormorant was publishing a bold Indigenous People Relations Policy, which is displayed prominently on the company’s website. Damian Kulasingham, Cormorant president, is quoted on the website as saying “Our success depends on building long-term partnerships and a culture of sharing alongside Indigenous people and communities”.

The company adds it is committed to the principles of Call to Action item No. 92 from the Truth & Reconciliation Commission of Canada, which is entitled “Business and Reconciliation”.

(The Truth & Reconciliation Commission ran from 2008 to 2015. It produced a list of 94 Calls to Action that aim to help heal wounds and, hopefully, bridge the divide between Indigenous and non-Indigenous Canadians.)

“Truly, it was a commission that looked at the path moving forward for the relationship between Canadian citizens, the corporate sector, for Indigenous communities, and how all of us can participate in reconciliation,” Fiona says. “And that was truly groundbreaking.”

I asked Fiona to explain the purpose and intent behind No. 92.

“Call to Action No. 92 is specific to business—the corporate sector and Indigenous communities—and it outlines why corporations and the business sector need to participate in that reconciliation relationship.”

“Creating and maintaining positive partnerships and relationships with Indigenous people and communities, now and moving forward, is a central value within the company and informs all of our actions. That understanding impacts every single piece of the company,” Fiona asserts.

Before joining Cormorant, Fiona admits she was impressed with Kulasingham’s leadership—as well as that of the executive and the owners—on Indigenous issues: “On what they believed Indigenous partnerships looked like, the impact of Indigenous-owned projects, how our sector was changing, and on our ability to transform the work that we do”.

“Taking the step to develop an Indigenous People Relations Policy, then sharing it broadly, is about leadership within the sector. It’s not just about what we’re doing at Cormorant… it’s about the path that we’re trying to create within the sector.”

CFFI put its principles into reality, having concluded the sale of Clearwater Fine Food Inc. to a consortium of First Nations, representing one of the most significant single equity transactions with Indigenous peoples in Canada.

“Our entire leadership, along with all our employees, really value this relationship, and seek to understand the context of Indigenous partnerships better, particularly when you realize there are land issues that directly impact Indigenous communities.”

With an Indigenous People Relations Policy in place and an executive team that stands behind it, how does the director of Indigenous Strategy fit into everything? We know Fiona is responsible for the long-term strategy for promoting and ensuring the inclusion of Indigenous communities, but what does inclusion mean in this context? What does it look like?

“To somebody like myself, inclusion means how Indigenous people, communities, and nations can participate in the sector,” Fiona says.

“And, you know, I feel we’re coming into a time when Indigenous people are the owners of energy-related projects. For us at Cormorant, we are honouring this particular era of Indigenous relations, where Indigenous communities are taking a much more active role.”

In that vein, Fiona believes Indigenous communities are looking for good corporate partners. “And when I say good partners, I mean partners who share the same values around the environment, around our relationship, around our future, around employment.”

And good partners are partners for the long haul.

“You’re still going to be partners five years from now; in 10 years, you’re still going to be partners because of the values you share,” Fiona explains. “That’s our mentality as we look at different energy projects all over the country. As an Indigenous person, I feel passionate and committed to what we’re trying to do in the long term, and what we’re building within Canada, together, and the new kind of understanding that we have of each other.”

All this is to say that if your Indigenous policy is to host a community information session to tell Indigenous community members what you are going to do… well, you had better go back to the drawing board. That’s old-school thinking.

“We’re talking about something incredibly substantive; a relationship built upon a lot of thought and a lot of actions. At Cormorant, we have prepared to be that kind of partner. To attract good partners within Indigenous communities, we had to transform ourselves and our understanding of inclusion.”

“And I think Indigenous people are a significant part of that inclusion,” Fiona continues. “As the original people of Canada, we have a unique role within the diverse makeup of Canada, and that role is tied to the land and our responsibilities to the environment, which directly impacts and informs the energy sector.”

Advice for communities and developers

If you’re a developer, remember that community visions will differ based on the community. “Not one vision is good for everybody,” Fiona says.

“We have to be able to step back and understand that it’s not about our vision for the region, but the Indigenous community’s vision for their region. Now, how do we support that vision?”

Even though in Canada we still desperately need directors of Indigenous Strategy and Calls to Action (all 94 of them), Fiona remains optimistic about the path we are on.

“You know, we were looking at Indigenous-owned energy projects only in, say, the last 5 to 10 years, and now we’re starting to look at them more and more. And that speaks to the leadership from Indigenous communities and the power sector, which is really starting to transform itself.”

Related
Indigenous? Female? Find work in the nuclear industry trades
Engineering and architecture firms bestow first B.C. Indigenous student award
“Not all actions have to be big actions” – Takeaways from Agents of Change 2021
EllisDon and bystander intervention training: “A responsibility to share”