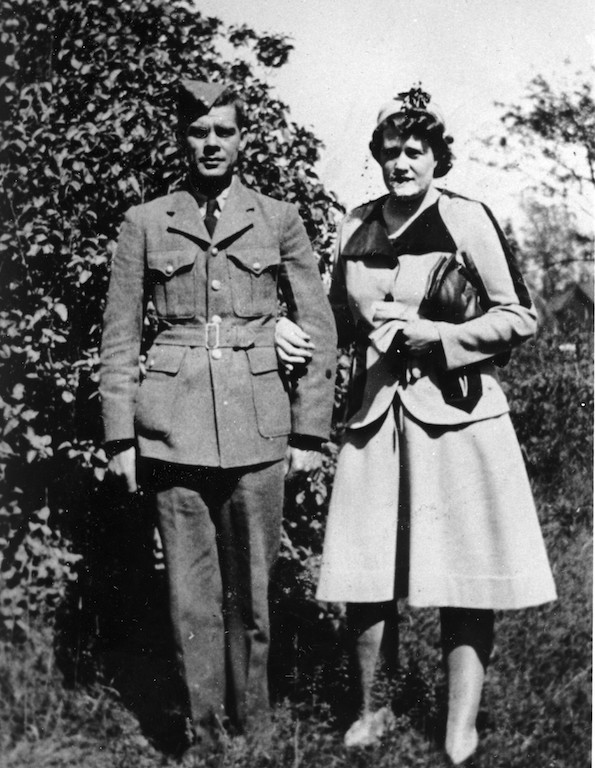 In June 1943 in the Whitney Pier area of Sydney, N.S., a young couple was seeking a marriage licence.

“What’s your occupation?” the clerk asked as he filled out the application form.

The clerk wrote it down and then asked Young for his fiancée’s occupation.

Obviously, the gentleman had misunderstood, so the clerk clarified he meant the bride-to-be’s occupation. Undeterred, Young insisted: “Craneman.”

The clerk was shocked. “My god, man, I can’t put that on the certificate!”

Eventually, Rose Grant and fiancé Roy were able to convince the clerk that she had indeed worked the crane at the rail mill in Whitney Pier. The clerk noted her occupation as “cranewoman.”

Rose Grant Young was one of many women who took over what had been traditionallyconsidered men’s jobs during Second World War conscription. The contributions of Grant Young and other women like her kept the wheels of industry and production spinning at home while young Canadian men were sent into combat overseas.

Rose’s father died before her second birthday. She and her sister were raised by their mother who made ends meet as a dressmaker. Rose began work at a general goods store, but soon sought out more lucrative work.

“At that time, my mother was in financial difficulties,” Rose told Cape Breton Magazine in 1984. “I asked for a raise at the place where I was working, and I didn’t get too much satisfaction. So when I heard that they were taking names on the plant, we went over and put our names in.”

Rose and other applicants were taken in for training — whoever took to the training quickest would get the jobs. There were no certifications or qualifications required.

“Back then, you were given training, but it would have been as if you were training at Tim Hortons right now,” said Rose’s daughter, Valerie Young Levesque, in a recent interview with Crane & Hoist Canada. “You had someone who told you, ‘This is the way it goes; this is the way it works,’ and if you caught it and could pick it up and do it, you got the job.”

Rose started crane work in a plate mill, where she learned simple lifts in a controll

ed environment. She proved adept enough that when a position opened in the rail mill, her superintendent motivated her to go for it.

“He told me, ‘They tell me a woman will never run the rail mill crane. You and I are going to prove them wrong!’ He was quite the psychologist. And, of course, that’s all I needed to hear, was that the men were against the women; in other words, that made me try that much harder.”

Training starts with a shock

Two candidates — Rose and another woman — were trained in the rail mill by a father-son duo. The son, who was about to leave for war, trained the other woman. The father, named Maynard, trained Rose. In a 1991 interview with The Beaton Institute, Rose described being brought into the chaos of the rail mill and where Maynard would teach her to run the 12-foot-high crane.

“I looked and there was hardly two inches that there wasn’t something in the way, and I thought to myself, ‘How in the name of God can I do any work in this place?’ This was the rail mill, where they roll the rails. And this great big housing, it’s like a house but like a jigsaw puzzle. You take it apart and you put it together for different size rails and all this. I thought the man must be a magician.”

Her first day training under Maynard was a rough start — she was electrocuted when she touched a charged billet while climbing into the crane.

“Where did the electricity come from, to run the crane? Never, ever dawned on me, you know. First thing I did was put my hand on one of the billets and I was caught, you know, couldn’t get my hand off. Nobody ever explained anything like that.”

In time, however, Maynard did teach her everything she needed to know to do the job. His training not only taught her the execution of the lifts and maneuvers in tight spaces, but he also taught her how to do her own repairs and maintenance.

“He was a fantastic operator,” said Rose in 1984. “He had been there for 35 years. He taught me how to pick up the boxes with the scrap in, take it down, dump it, bring it back. He taught me so many things about the lifts, how to keep it from swaying and things like that.”

Rose earned the job on the rail mill crane and few years later Maynard became her father-in-law — Rose’s eventual fiancé Roy had been training the other candidate.

Crane operators in the rail mill would have to position rollers for the hot steel to roll through, swapping for different sized rollers as necessary, all while maintaining safety for the workers below. Rose’s masterful and safe control of the crane earned the respect of her co-workers.

Rose retired from operating the crane as men began returning from the war. In the years that followed she spoke fondly of her time on the cranes, though she kept herself very busy.

“My mom was a very smart woman,” Young Levesque recalled. “She didn’t go to college, but she never stopped learning. Anything that was of any interest whatsoever to her — and everything was — she had to learn more about it. She was such a good woman in everything she did. She was involved in political parties, she would open offices for certain parties and would run that. She was involved in a lot of things. She was a community leader.”

In the 1990s, a reporter described her as Canada’s version of Rosie the Riveter, the popular war-era icon representing the women who worked in American shipyards and factories. Rose Grant Young enjoyed the attention and reminiscing about her past until she died in 1994. Today, her daughter is happy to share her memories and to have her Rose’s contributions recognized.

“There’s a young woman who drives a tourist limousine here in the summer,” Young Levesque said. “I just found out last year that she uses my mother’s story. She refers to her as our Canadian Rosie the Riveter every time she takes someone out. That blew my mind when she told me that. I think it’s wonderful that my mother’s story is being brought out every summer.”