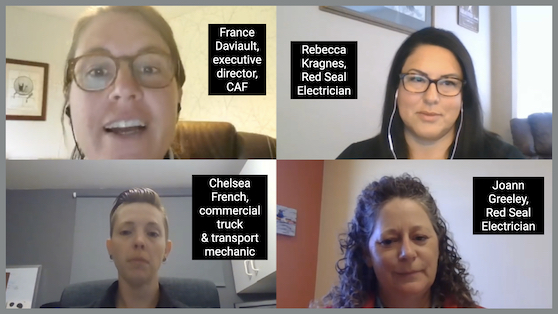 October 12, 2020 – In 2019, the Canadian Apprenticeship Forum led a task force of more than 60 skilled trades stakeholders to guide and inform a strategy to create measurable change for women’s representation in skilled trades careers in Canada.

And now, CAF has released a national strategy for Supporting Women in Trades (SWiT), which is built upon four action items that are intended to generate awareness, trigger policy change, recognize best practices and create skilled trade workplace environments where women’s representation increases.

According to the Statistics Canada 2018 data, women represented 4.5% of apprentice registrations in the construction, manufacturing and transportation sectors. The SWiT task force established a national target to increase participation and retention of women in skilled trades careers to 15% by 2030.

“Even tradespeople hate to hear ‘quota’,” admitted Chelsea French, a commercial truck and transport mechanic, during CAF’s webinar about the national strategy. She suggested, instead, that industry see this as a ‘target’ rather than a quota, adding “I don’t want to be the ‘equity hire’… I just want to do the job.”

The strategy aims to start a national movement, with a call for champions to pledge they will share their internal numbers on the percentage of women apprentices and journeypersons they employ annually in skilled trades.

“Those who join the movement as champions by taking the #champions4change pledge are truly changemakers and leaders,” says France Daviault, CAF executive director. “They understand that numbers matter and aren’t afraid to be part of the discussion.”